The amazing world of lymph nodes – what can we still discover?

Hi there! Join me and dive deep into the incredible lymph node, come explore the immune system and be amazed by its capacity to take care of us.

I study lymph nodes. They are small central units of our immune system and a couple of hundred of them are located all around our bodies. Lymph nodes are situated under our arms, in our gastrointestinal tract and below the chin in our neck region to name a few locations. When you catch a cold, you may notice enlarged and sore lymph nodes by feeling the side of your neck below your chin. That tells you that your immune system is activated and your body is working hard to defeat the unwanted pathogen causing your cold.

Our immune system is comprised of multiple organs and a wide range of cells. Lymph nodes play an important role in triggering cell-mediated immune responses. Once the invading pathogens that have entered your body reach the lymph nodes, they will be introduced to immune cells, which become activate and start destroying the foreign invaders. Leukocytes that reside in the lymph node have been studied extensively, but I’m interested in a certain other cell type in the lymph node, the structural cells.

If only these walls could talk

Currently, the role of the extracellular matrix in regulating lymph node function is still poorly understood as it has primarily been thought to be a passive structural element. But what if it had an active role? What if it actually is like a floorplan determining what happens in each region of the tissue? If only these lymph node walls could talk!

We need functionally intact lymph nodes to maintain our health throughout our lifetime. This is why it is extremely important to study how lymph node function is regulated. My current research focuses on exploring what are the different structures of the extracellular matrix in the lymph node and how do they change in response to inflammation. There are several different structures – and yes, they do change a lot! Finally, I will investigate how these changes affect the lymph node capacity to defend the body against pathogenic invaders.

In my research, I do a lot of imaging at the microscope. No, I don’t look at countless slides through a little 30-cm-tall microscope while taking notes in a dusty old notebook. Rather, I sit in a large dark room equipped with several microscope-computer-complexes that are a few square metres in size. These microscopes are computer-operated but I still take many notes by hand while looking at hundreds of samples.

The modern microscopes have more buttons and levers than you can even imagine or have time to press. These microscopes can be equipped with lasers that scan and excite fluorescent molecules in the samples. By collecting the light emitted by these molecules, I will eventually gain new information about the structures of the extracellular matrix in the lymph node. This imaging step is preceded by the collection of lymph node samples, their careful preparation into microscopic samples and a lot of trials – sometimes even errors.

Imaging has many great features. One of my favourite is to be able to see with my own eyes how the tiny lymph node actually looks like. Sometimes I take images of thin tissue slices that are only a few micrometers in thickness. Then again, I might image an entire lymph node that has been chemically treated until it becomes completely transparent. Imaging these transparent samples is like experiencing a little magic – I cannot even see the sample with my bare eyes, but as soon as I switch on the lasers at the microscope, all sorts of amazing things appear on the computer screen. 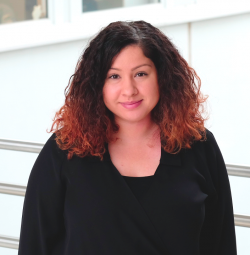 The author works as a post-doctoral researcher in the research group of Professor Marko Salmi at the Institute of Biomedicine, University of Turku. In 2020, Ruth Fair-Mäkelä received her PhD by studying the regulation of leukocyte traffic in lymph nodes at the Medicity Research Laboratory at the University of Turku. Professor Salmi and his research group are studying how the immune response in regulated among other things. The group is part of the InFLAMES Flagship funded by the Academy of Finland.