New non-native species, mass outbreaks and farewells – In what ways is climate change manifested in the animal populations of the Northern fells and Baltic Sea?

Ecological communities are changing at an unprecedented speed worldwide. Invasive species, mass outbreaks of pest insects and tropical pathogens spreading into new regions populate the headlines but we also have frequent news about the distress and extinction of animal and plant species. There are multiple causes for this natural upheaval, ranging from alterations in land use, agriculture and forestry to climate change. It is often hard to discriminate between the different causes. The long time series of observations provided by the Seili, Kevo and Värriö field stations are used to clarify the role of climate change in this puzzle.

For more than 50 years, the field stations of the University of Turku, located on the island of Seili within the Archipelago Sea and at Kevo in Utsjoki, Lapland, as well as the field station of the University of Helsinki at Värriö in Salla, Lapland have carried out observational studies on invertebrate species, animal plankton (zooplankton) as well as butterfly and moth species. Data material is also available that describes climatic and other habitat alterations during the same period of time and thus enables us to study the changes in invertebrate biomass over the past decades. These materials also provide a unique opportunity to compare aquatic and terrestrial ecosystems.

Changes in the distribution areas of individual animal species have been studied all over the world, but less attention has been paid to the variation of the overall biomasses. Yet, the overall amount and availability of, for example, moth larvae or zooplankton, play a more important role for those animals that feed on them than the occurrence of any individual species.

It is often difficult to identify the fundamental causes underlying the changes in species composition in the long term, despite the access to measured data on different environmental variables. In many cases, educated guesses are the only possibility when considering whether the decline of a particular species is caused by alterations in the cultural landscape within its habitat or the use of pesticides in nearby fields, or if the underlying cause might be the rising temperature or changes in rainfall. Frequently, the different variables also interact; when the climate changes, a need arises to adopt new agricultural practices and cultivated plants in response to the new circumstances. All these factors may affect, in various ways, the ecosystems and the wildlife fauna and flora in the area.

The universities’ field stations in Lapland and within the Archipelago Sea are located in isolated areas with relatively scarce human settlement and minimal human impact on ecosystems. In this type of habitat, it can be assumed with high probability that any trends observed in the species composition result precisely from changes in the climate and natural environment. Still, there are a multitude of aspects to study: are the species responding to changes in, for example, winter temperature, rainfall volume, the length of growth season or the salt content of seawaters?

For decades, the field station of the University of Turku, located on the island of Seili within the Archipelago Sea has carried out observational studies on animal plankton (zooplankton). Picture: Kari Mattila.

A regime shift in the fell birch forest

The butterfly materials used for the study were collected by means of light traps. During a single summer, hundreds of butterflies end up in the trap located below a bright light. The majority of them are quite different from the colourful butterflies fluttering over the warm and sunny meadows. The identification of these small, often less than one centimetre long, greyish moths calls for special expertise – which our co-operative partners luckily have!

The hundreds of thousands of individual moths included in the materials provide an interesting insight into the species composition of the arctic regions. There are multiple species but most of them are few in number – individual moths representing different species are occasionally found in the traps. One species is so abundant that it exceeds all other species: up to 80 percent of the moths trapped at Kevo are autumnal moths (Epirrita autumnata) and their share of the biomass is nearly 90 percent. The mass outbreaks of this species have been studied for a long time, and frequent visitors to Lapland are familiar with the sight of mountain birch forests where the trees have been killed by the moth larvae feeding on them. In some years, however, autumnal moths are almost completely lacking in the collected material. The winter moth (Operophtera brumata) also shows the same type of cyclicity. Along with climate warming, the winter moth is apparently becoming an even more significant species than the autumnal moth in the northern parts of Finland.

Brackish and limnic species challenge the oceanic ones

In our research, we also explore the zooplankton of the Baltic Sea. The results indicate that the zooplankton biomass has significantly declined since the year 1966. The biomasses of oceanic zooplankton species, in particular, have reduced markedly. In contrast, many brackish and freshwater (limnic) species have remained rather unchanged or even increased in biomass over the time.

It is known that climate change affects the zooplankton communities of the Baltic Sea, especially through the rising temperature and decreasing salt content (salinity). Over the past decades, a declining trend has been observed in salinity. Winter precipitation has increased, which has resulted in a greater rate of freshwater runoff to the Baltic Sea. The positive water balance and discharge from the Baltic Sea to the North Sea have been on the rise for the Baltic Sea since the 1980s. Accordingly, the saltwater pulses from the North Sea to the Baltic Sea are, today, less frequent than they used to be, and their volume is smaller. A major winter storm is necessary for the ocean water to overcome the threshold and pass the narrow straits of Denmark into the Baltic Sea.

As a result of rising winter temperatures, the period of ice coverage in the Northern Baltic Sea has become shorter or, in some years, has been non-existent. The changes in temperatures and ice coverage have an effect on, among other things, the timing of the peak bloom of plant plankton (phytoplankton), especially diatoms in the spring. Spring floods resulting from the snowmelt in the catchment basin no longer bring a flood-like nutrient flow into the sea that would trigger the diatom bloom. The temporal compatibility between zooplankton and phytoplankton has grown weaker: currently, the diatom bloom begins earlier in spring and lasts longer but it is not as intense as it was a few decades ago.

The root causes for changing water temperature and salinity are found in the changes occurring in the Atlantic weather centres. In the 1980s, the Winter NAO (North Atlantic Oscillation) index turned to become predominantly positive in the North European regions. The positive NAO index means that winters within the Baltic Sea region are temperate and rainy.

Is the observed biomass development inevitable because of the contemporary climatic change? To what extent will the changes in, for example, the Atlantic weather centres, actually regulate the zooplankton dynamics in the Baltic Sea? Our currently ongoing research project seeks to find answers to these questions.

Similar trends in the Archipelago Sea and Lapland?

As one of our main research questions, we investigate whether the changes in the species composition and biomasses of butterflies and moths versus plankton organisms actually have anything in common. The changes in the species composition occurring in marine regions are partly explained by the systemic regime shifts, in other words, the extensive developments taking place at a relatively rapid rate in, for example, seasonality and water temperature. Fundamentally, the changes result from climate change, and they have a major impact on entire oceans. It can be assumed that the changes also affect terrestrial ecosystems through, for example, changes in the length of the growth season or rainfall – but this topic has not yet been studied at all. Therefore, within our research project, we endeavour to develop, as one of the first, a synthesis on how the climatic regulation related to regime shifts is manifested in two very different organisms.

Julia Fält-Nardmann is currently working at the Biodiversity Unit of the University of Turku and at the Institute of Forest Botany and Zoology in the Technische Universität Dresden, Germany. She investigates the adaptation of butterflies and moths to climate change and the spreading of new pest moth species from Central Europe to the northern regions. She also introduces forestry students to the field of insect knowledge and research. 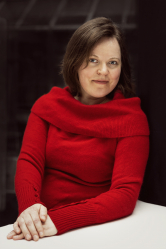 Heta Rousi is working at the Biodiversity Unit of the University of Turku. She is interested in the impacts of climatic and other changes in the marine environment on marine invertebrate species. Her PhD dissertation concerned the effects of physical and chemical environmental variables on the bottom animal communities (zoobenthos) in the Northern Baltic Sea.

Climatic factors in the Atlantic control the oceanographic and ecological changes in the BalticSea: https://www.researchgate.net/publication/201169653_Climatic_Factors_in_the_Atlantic_Control_the_Oceanographic_and_Ecological_Changes_in_the_Baltic_Sea