Iodine in the Baltic Sea – a new factor behind a changing sea?

Salinity is considered to be the most important environmental factor that defines the ecosystem of the Baltic Sea. However, researchers have found some evidence to suggest that, in addition to salinity, there is reason to look at how, for example, the amount of iodine affects the survival of the Baltic Sea species.

Salinity is considered to be the most significant environmental factor that defines the distribution, population and diversity of species in the Baltic Sea. So far it has primarily been studied as a background factor whose impact on the ecosystem is expressed indirectly – mainly through changes in species composition. Data collected during the last decades, however, indicate that the changes may also be influenced by some other factor related to seawater salinity, such as iodine, whose impacts on the Baltic Sea have not yet been researched.

Iodine is a micronutrient essential to the functioning of the thyroid gland, required to produce thyroid hormones. Thyroid hormones are necessary for the regulation of vital functions not only in humans but also in other vertebrates and even invertebrate organisms. Chronic iodine deficiency interferes with the functioning of the thyroid and leads to various metabolic disturbances and diseases.

The oceans are rich in iodine, and the amount and significance of iodine in them are well known. However, there is far less information about how the amount of iodine fluctuates and what impacts it has in brackish water areas like the Baltic Sea. Since freshwater systems have low amounts of iodine, the most significant source of iodine in the Baltic Sea are most likely the saltwater pulses coming through the Danish straits, which have become more infrequent in recent decades.

The aim of my research project, funded by the Sakari Alhopuro Foundation, is to clarify the significance of the potential changes in iodine amounts to the ecosystem of the Baltic Sea. The project is fuelled by environmental data collected over several decades, the observation of which created a need to look at the impacts of climate change from this perspective as well. The research project is divided into parts which map the temporal and regional variations in iodine and thyroid hormones using multidisciplinary methodology. The University of Turku has been researching the reproduction of Baltic herring since the 1980s. Therefore, the research focuses particularly on the Baltic herring: not only to find out the temporal and regional variations in iodine and thyroid hormones, but also to get as detailed data as possible about the significance of these changes to the reproduction and survival of species.

Baltic herring as indicator of changes

For a marine fish, the Baltic herring, the dominant species of our open waters, is surprisingly well adapted to the changing and demanding conditions of the Baltic Sea. It is capable of reproducing almost in the entire Baltic Sea region – reproductive success being the most important prerequisite for a species to remain vital in its habitat.  However, climate change challenges the adaptability of the Baltic herring. During the last decades, climate change has both warmed and sweetened the water of the Baltic Sea, which has a direct impact on fish physiology. Changes also occur indirectly through, for example, nutrition.

Based on the data gathered during the last decades, it is reasonable to assume that Baltic herring will continue to swim in Finnish waters in the future as well, but its characteristics will probably be different. There are already some indications of future changes: for example, the Baltic herring is now significantly smaller and leaner than in the 1980s.

The iodine research project is only in its early phases but preliminary results have given us more information about other changes in the Baltic herring and the connection of these changes to observed changes in the environment. It remains to be seen what new information these results together with data gathered from other organisms reveal about the past and future changes of the Baltic Sea. 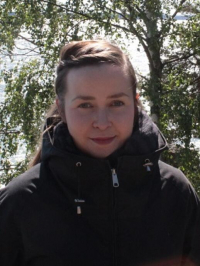 Katja Mäkinen is a Postdoctoral Researcher in the Archipelago Research Institute of the University of Turku, whose 2019 Doctoral Thesis for the University of Turku was entitled Climate-induced variability in Northern Baltic Sea zooplankton. She continues her research into the subject in, for example, the Sakari Alhopuro Foundation-funded project.

Baltic herring research at the University of Turku https://sites.utu.fi/herringproject/.