Exploring the herpetological diversity of Melanesia

In Melanesia, the diversity of species is high and there are numerous unique, endemic species native to the region. It is increasingly important to study the biodiversity of the region as many of the species may be threatened by habitat loss, climate change or invasive species. The scientific results of this research will increase our understanding of herpetological diversity and hopefully benefit the planning of future protection measures.

Many assume that species richness of vertebrates (animals with a backbone) and especially of tetrapods (four-limbed animals) is already well known. This is, however, not the case – new species are being found all the time. For instance, the number of newly described mammals grew by approximately by one thousand during the period 2005–2018. Approximately 100–200 new reptile species are identified and described each year.

Globally, altogether over 68,000 vertebrate species are currently recognized. More than half of them are fish (approx. 34,300 described species). The second richest group are reptiles (11,400 described species), followed by birds (10,000), frogs (6,600) and mammals (6,400). Minor species groups include hagfish and lamprey (120), lungfish (6) and, finally, lobe-finned fish or coelacanths, with only two described species.

My research focuses on the species of reptiles and frogs in Melanesia, that is, in New Guinea and the surrounding islands in the southwestern area of the Pacific Ocean. For a biologist, Melanesia is interesting for several reasons. Thanks to the equatorial tropical climate, the diversity of species is rich in general. The region also includes a large number of more or less isolated islands and island groups whose nature is still rather untouched and unexplored.

With an area of 780,000 square kilometres, New Guinea is the largest tropical island in the world. The island is longitudinally split by a massive central mountain range that crosses almost the entire island from northwest to southeast. North and south of this are lowland plains covered with rainforest, savannah and river systems. In addition, the island features several smaller mountain areas of different geohistorical origins. The island thus provides a variety of habitat types from snow-covered peaks and alpine grasslands to mountain forests, savannahs and mangrove swamps. Many of the other larger Melanesian islands share a similar topography and high biodiversity, but on a smaller scale.

Isolation drives speciation, or the development of species, and the geography of Melanesia is  full of barriers that restrict gene flows between populations. For many reptiles, such barriers could be a stretch of open ocean between islands, while for some frogs, a river valley between two mountains can be enough. This has resulted in both a high total diversity of species and a high degree of local endemism. The vast majority of the approximately 900 known reptile and frog species in Melanesia are endemics.

My research is focused on finding and describing this diversity, studying their evolutionary relationships, and defining geographical areas with high levels of endemic species. Up to date, my work has focused on the islands off the northern and eastern coast of New Guinea belonging to the state of Papua New Guinea (PNG). 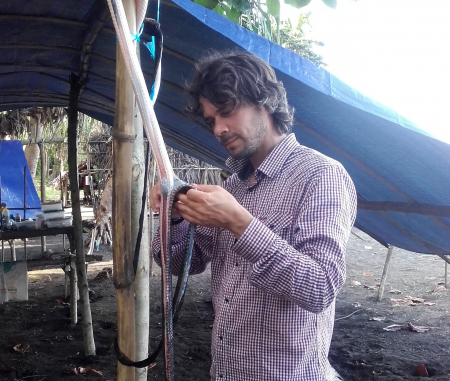 Field work in this region is extremely interesting and rewarding, but often logistically challenging, due to the poor infrastructure and communications. In 2018, I carried out field work and species inventories together with researchers from the University of Michigan and the National Museum of Papua New Guinea. We surveyed the reptile and frog communities of the Bismarck volcanic arc that stretches along the north shore of PNG. Our aim was to collect samples from the islands of Karkar, Crown, Tolokiwa, Sakar and Umboi for further study and analyses by researchers at the Turku and Michigan University Museums. In the same year, we also initiated field surveys in the Varirata National Park, which is located in the Owen Stanley mountain range just north of the capital city of Port Moresby.

In 2020, the Sakari Alhopuro Foundation awarded a grant for the study and analysis of the resulting collections. On the islands, there are some 80 reptile and frog species of which about half a dozen are undescribed. Biogeographically, most of the species appear to originate from New Guinea, while a smaller portion is derived from the Bismarck Archipelago. In contrast, the newly described species seem to be endemic to the surveyed islands.

Knowledge of the diversity of species and occurrence of endemic species is ever more important for the region as its natural environments are increasingly threatened by deforestation, large scale mining operations, climate change and population growth. The scientific results of this project will hopefully enhance awareness of the unique nature of Melanesia and benefit the planning of future protection measures.

PhD Valter Weijola works as a post-doc researcher at the Biodiversity Unit of the University of Turku. His doctoral dissertation from 2017 was entitled “Phylogeny and taxonomy of the Pacific monitor lizards (Squamata: Varanus: Euprepiosaurus)”. Since 2008, he has studied biodiversity and endemism in the Pacific Islands. With a grant awarded by the Sakari Alhopuro Foundation, he is now studying the species diversity and biogeography of reptiles and frogs on certain unexplored volcanic islands off the northern coast of New Guinea.