Could ecological knowledge be utilized in developing treatments for human diseases?

There is abundant research information concerning the microbiomes, or the communities of microbes and their collective activities in different habitats. However, less progress has been made in revealing universal ecological and evolutionary rules governing microbial ecosystems, which hampers the engineering of microbial therapeutics to serve human needs. We are now tackling this knowledge gap by constructing and characterizing simplified communities of gut microbes in the laboratory.

Complex lifeforms have an evolutionary history that stretches back roughly 500 million years. Microbes or microscopic organisms like bacteria, viruses, archaea and eukaryotes have been on earth, in one form or another, approximately seven times longer. Single-celled organisms occupy nearly every corner of the plant, from hot springs to radioactive waste. These organisms are vastly smaller and less complex than a human cell, yet we share genes. We are descendants of a multitude of single-celled organisms and, at times in history, have incorporated microbial DNA into our genome.

Microbes exist in astronomical numbers. There is about one microbial cell for every human cell in and on the human body, and every hour we shed nearly 40 billion of them into our surroundings. Some of these shed cells cause disease while others nourish us through complex symbioses. Because of the sheer number of microbes on this planet, the consequences of their collective activity are enormous. For example, nearly half the oxygen we breathe comes from microscopic single-celled phytoplankton in the ocean.

The field of microbiology has traditionally been practiced with pure cultures of single species. This perspective, primarily born from medicine, emphasizes the role of physiology (i.e., how cells conduct the biochemical functions necessary for life). Less attention has been paid to interactions between species (i.e., ecology) or change through time (i.e., evolution). Although microbes are clearly different from plants and animals, the communities of microbes generally follow the same rules as their macroscopic counterparts. For example, microbes fighting for space and resources evolve the ability to produce antibiotics to suppress and kill competitors, while competitors evolve to resist the effects of antibiotics. Still, it is only recently that ideas from ecology have been integrated with “classic” microbiology.

Ecological and evolutionary ideas contribute substantially to our understanding of antibiotics and disease. Over the last 100 years, humans have used and misused microbial-derived antibiotics to treat disease. However, we now know that one consequence of antimicrobial therapy is dysbiosis – the alteration of the microbiome structure from a healthy state. A dysbiotic gut microbiome can provide growth opportunities for pathogenic and antimicrobial-resistant bacterial strains, which are global threats to human health.

Resilience helps the microbiome to manage antimicrobial disturbances and pathogenic invasions. Resilience is an ecosystem’s ability to rebound from disturbance to its original state. Abrupt shifts in the state of an ecosystem, known as critical transitions, can occur if a disturbance exceeds the ecosystem’s buffering capacity. This, in turn, pushes the system to an alternative and often drastically different stable state. Critical transitions are well-known phenomena in large-scale ecosystems – for example, commercial fisheries collapse due to over-harvesting – but are largely unexplored in microbiological research. In our research, we are trying to decipher what drives resilience in the human gut.

What drives resilience in the human gut?

With funding from the Sakari Alhopuro Foundation, my team and I are designing, constructing and characterizing simplified communities of gut microbes in the laboratory. Our research is guided by ecological and evolutionary principles. Our aim is to explore how ecological concepts developed for macroscopic systems manifest in the microscale world of bacteria. We are trying to decipher what drives resilience in the human gut and whether we can predict tipping points between “healthy” and “diseased” microbial community states.

Our research seeks answers to questions such as: “How does biological diversity affect ecosystem resilience in response to an invasion by harmful bacteria?” and “What ecosystem properties are necessary for successful pathogen invasion?” Our ultimate goal is to apply this ecological knowledge to inform treatments for human disease. Thus, we pursue to uncover ecological properties that provide a buffer against pathogen invasions into the human gut. 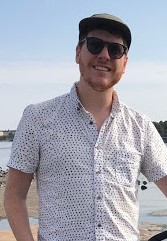 Shane Hogle is a postdoctoral researcher in the Department of Biology at the University of Turku. Previously, he was a postdoctoral researcher at the Massachusetts Institute of Technology (MIT) in the USA, studying marine cyanobacteria. He received his Ph.D. in Oceanography with a focus in Marine Chemistry and Microbial Oceanography from the Scripps Institution of Oceanography at the University of California, San Diego, where he was an NSF Graduate Research Fellow. He completed his undergraduate bachelor's degree in Chemistry at Earlham College (USA). Shane is originally from the United States but currently lives in Turku, Finland, with his family.