We are all responsible for the natural environment of Finland

Since the 1960s, I have observed Finnish nature and, in particular, the Archipelago Sea from the outskirts of Airisto, near to Kukkarokivi island and the open sea off Viheriäinen in Naantali. I have witnessed the eutrophication of the Archipelago Sea and noted changes that, in order to be rectified, specifically require the contribution of the people of Turku. Finnish nature and its condition, however, are the responsibility of each and every one of us, as is stated in the Constitution of Finland. This is something we should be thinking about especially today – on Finnish Nature Day.

The eutrophication of the Archipelago Sea began already in the early 1960s along with the gradual increase in ship traffic. Back then, we used to sit on the cliffs by the sea and admire the big tankers of Neste Ltd that arrived in Naantali once a week with full tanks before departing with empty ones. The other ships we watched were navy vessels: the fast Nuoli class boats, the frigate Matti Kurki and, later on, the escort vessels Uusimaa and Hämeenmaa as well as equipment barges that headed out to sea on Mondays and came back towards the end of the week. The water was clear and there were bladder wrack growths off the Saaronniemi point. After that, the cruise ships started operating between Finland and Sweden and the water turned turbid as the waves of the ships hit the shores more often than before. Reeds took over my swimming place and both bladder wrack and perch disappeared from the rocky shores.

Marine researchers began to see signs of eutrophication all throughout the Baltic Sea. International conservation activities in the Baltic Sea were initiated along with the establishment of the International Baltic Sea Fishery Commission (IBSFC) – the Commission’s office was set up in Helsinki in the 1970s. The Commission started its operation by classifying the environmental problems seen in the Baltic Sea according to their location and compiling a list of hot spots. There were a total of 168 hot spots, problem areas, that included population centres, industry and food production.

The Archipelago Sea is a common cause for the people of Turku.

When searching for the causes of the condition of the Archipelago Sea and Finnish nature, one should primarily turn to industry. At one time, the forest industry damaged Finnish waterways with mercury, and the activities of the chemical industry have polluted both water and air and sped up insect loss with harmful products, such as DDT and dioxin, the by-product of DDT. The list goes on and on.

Today, the structural changes brought about by the European Union can also be added to the list of culprits. The EU favours specialisation, and therefore crop cultivation and animal farming are no longer practised next to one another: the natural fertiliser developed on animal farms is no longer used directly on plants, as was the case in the 1960s.

It is possible to make improvements to the condition of nature, and this has been done. The forest industry was forced to change its courses of action, lead-free fuels have been developed, DDT and dioxin concentrations have been reduced thanks to bans on their use and other regulations. Democracy provides its own means of force, simply by changes in the legislation. These means should now be put into use with the fertiliser industry.

Nature that is spoiled by humans is merciless

Global environmental pollution originated from the problems created by population growth. The green revolution that began in the 1950s greatly increased the use of artificial fertilisers, favoured the use of pesticides without ecosystem testing and initiated enhanced plant breeding. These methods were used to eliminate famine but, at the same time, they fuelled the current population explosion.

Problems associated with environmental toxins were noticed early on when the American marine researcher Rachel Carson wrote the book Silent Spring, which gave rise to environmental discussions, also in Finland. Here, the discussion was aimed at the forest industry. Pekka Nuorteva wrote the book Elohopea Suomen luonnossa ja hallintokoneistossa (Mercury in Finnish nature and administrative machinery). By changing the legislation, it was possible to force the forest industry to give up its use of mercury, and the use of DDT and BCPs was prohibited. That was a good step, but the industry did not stop there. Instead, it started developing new environmental toxins. Still, no advance tests were required for them on the ecosystem level. Today, we are burdened by so-called forever chemicals, in other words per- and polyfluorinated alkyl substances (PFAS), that are completely synthetic. They remain in nature for a very long time, are accumulated in food chains, cause cancer and disturb the hormonal and immune systems.

When following today’s discussion on the environment, one gets the feeling that nothing has been learned even though nature loss is already visible to everyone; after driving a hundred kilometres, you no longer need to clean the windscreen of your car from dead insects, and the number of insect-eating birds has declined. Spring in Finnish nature is turning silent. Discussion concerning the condition of nature is very limited in Finland. The problems associated with the Archipelago Sea, insect loss and climate change are viewed, in a way, as separate issues although they are closely connected to one another – as is everything in nature. The last person to be engaged in comprehensive discussion concerning nature was Pentti Linkola, and the facts stated by him are still valid, although the type of hate speech he practiced is not acceptable. The current development must be reversed quickly or the world will be destroyed right before our eyes. We have already seen thousands of people lose their homes due to the climatic catastrophe. Delaying actions now would mean witnessing millions die for the same reason.

Nature loss concerns us all.

Continued economic growth is an illusion

The scientific background of overpopulation was mentioned already in the 18th century when the English demographer Thomas Malthus demonstrated that exponential growth of a given population will lead to the emptying of its resources. Economic growth is regularly presented as if it were a justification to continue in the same way. No such justification exists. The possibility of continuing along the current course of economic growth is a delusion, an illusion.

The survival of Finnish nature from this year onward depends on how humankind is able to solve its problems, the biggest of which is the inability to control the birth rate. There is surprisingly little discourse on this particular matter.

These are my own thoughts, not necessarily the positions of the Foundation. 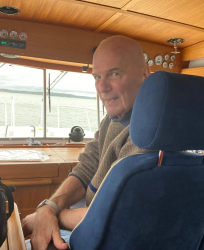 Ilppo Vuorinen is a professor emeritus at the University of Turku. He has spent a great deal of time doing extensive research on the state of the environment and related changes. For the most part, he focused on maritime research in, among other places, the Southern Ocean and Baltic Sea. Additionally, he contributed to tick and Lyme disease research and, from the early 2000s, he led annual marine biology courses at the Archipelago Research Institute on the island of Seili.